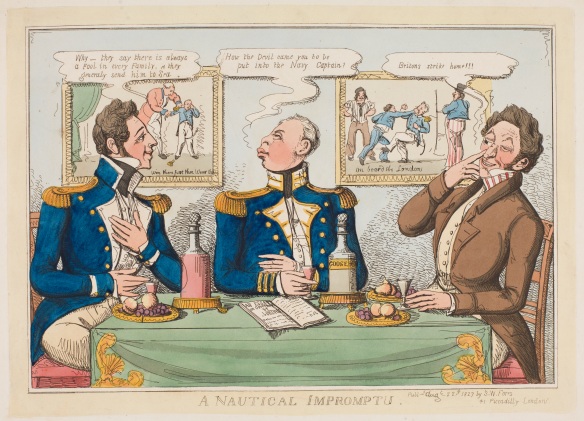 Satire with two naval officers (one of whom is the Duke of Clarence caricatured, with heavy jowl, protruding lips, and small slanting eye) abusing each other at table, observed by a civilian who winks and holds a finger to the side of his nose. The naval officer on the right says, “Why, they say there is always a fool in every family, & they generally send him to Sea.” The Duke of Clarence in the middle responds, ” How the Devil came you to put into the Navy, Captain.” The civilian to the right, observes, “Britons strike home!!!” On the table are plates of fruit and wine glasses with two carafes one of which is labeled “Goose” and a booklet entitled “An essay on Government by Jordan”. Two pictures on the wall in the background illustrate the theme: on the left, the image shows a man (King George) holds the arm of a crying young cadet, a sword between his legs, carries the title “Win them first then wear them.” On the right, “On board the London” is an image of two officers fighting while two big sailors smile as they watch.

“Hudibras is sprawled on the ground with Trulla, a large country-woman, astride him fending off angry villagers, including a cobbler and a butcher, wielding clubs; to left, Ralpho is held by a man with a rope and another with a sword”– British Museun online catalogue.

Capt. Keith struggles as he is attacked by two Indians one of whom has grabbed his rifle while another Indian stands with his tomahawk raised above the Captain’s head. The Captain’s wife with her child in her arms reaches up towards her husband as she kneels in a row boat. Other Europeans are shown in the background left and on the right, frightened, fleeing, or struggling with a band of Indians.

An allegorical representation of the nationalistic riot occasioned by a troupe of French comedians in London. This satirical print refers to the controversy and protest surrounding a French theatrical company, nicknamed the ‘French Strollers’, who applied for and were granted a licence to perform at the Haymarket in the winter of 1749. Their arrival occasioned much discontent; as the Scots Magazine reported, they were ‘bitterly pelted in the news-papers’. Asserting their right to perform, they persisted in a show on 14 November, but were met by an audience intent on sabotage. An eyewitness account of the incident appeared in the Monthly Review some years later (July 1761): ‘People went early to the Theatre, as a crouded House was certain … I soon perceived that we were visited by two Westminster Justices, Deveil and Manning. The Leaders, that had the conduct of the Opposition, were known to be there; one of whom called aloud for the song in praise of English roast beef, which was accordingly sung in the gallery, by a person prepared for that purpose; and the whole house besides joining in the chorus, saluted the close with three huzzas! This, Justice Deveil was pleased to say, was a riot’. Despite the Justice’s assertions that the play was licensed by the King’s command, the crowd had come prepared to produce disruption. They were equipped with instruments which they played discordantly as an accompaniment to their jeers, catcalls, and Francophobic songs: ‘as an attempt at speaking was ridiculous, the Actors retired, and opened instead with a grand dance of twelve men and twelve women; but even that was prepared for, and they were directly saluted with a bushel or two of peas, which made their capering very unsafe’. Unable even to dance, and following another abortive attempt by the magistrates to assert the King’s authority, the curtain fell for the final time. The eyewitness evidently relished the outcome, venturing ‘that at no battle gained over the French, by the immortal Marlborough, the shoutings could be more joyous than on this occasion’. The print embodies similar sentiments; the French strollers attack British theatrical establishment–represented by an affronted Britannia–who stands between them and British theatre-goers. In the foreground stands a perplexed Othello, lamenting the loss of his occupation, and an injured man a man lies on the floor ‘Almost kill’d for not understanding French’.